SUNNYVALE, Calif., June 22, 2021 – Intrinsic ID, the world’s leading provider of Physical Unclonable Function (PUF) security IP for embedded systems, today announced that its flagship hardware IP product QuiddiKey has been certified by the National Institute of Standards and Technology (NIST). The certification of QuiddiKey version 3.8.0 has been performed under NIST’s Cryptographic Algorithm Validation Program (CAVP) and assures that cryptographic components of the product have been tested and operate as they should under NIST’s guidelines.

“Passing the NIST CAVP certification is another important step in Intrinsic ID’s ongoing efforts towards improved standardization for security IP in general and Intrinsic ID’s products in particular,” said Pim Tuyls, Chief Executive Officer (CEO) of Intrinsic ID. “Facing the problems of today’s rapidly growing device markets, such as the Internet of Things, which rely on incredibly fragmented hardware options, we believe that the only way to keep devices and networks secure is to encourage more collaborative standardization. NIST’s CAVP is one of the programs that is taking a leading role in this process, and we are happy to join this initiative, along with the many other certifications that we have already obtained for our products.”

Intrinsic ID's QuiddiKey is a hardware IP solution that enables device manufacturers and designers to secure their products with internally generated, device-unique cryptographic keys without the need for adding costly, security-dedicated silicon. It uses the inherently random start-up values of SRAM as a PUF, which generates the entropy required for a strong hardware root of trust. QuiddiKey IP can be applied easily to almost any chip – from tiny microcontrollers to high-performance systems-on-chip. SRAM is a standard component available upon initial release of any process technology; because it uses SRAM as a PUF source, the IP can be used with any foundry and process-node technology. QuiddiKey has been deployed and proven in hundreds of millions of devices certified by EMVCo, Visa, CC EAL6+, PSA, ioXt, and governments across the globe.

Since the release of version 3.8.0, a configuration of QuiddiKey is available that includes a “Lab Test” interface, a capabilities registration JSON file and documentation that together enable users to test the cryptographic functions with the NIST server, validating that QuiddiKey, as integrated on their chip, faithfully executes the functions it supports according to the applicable NIST specification. Having all this in place provides support for Intrinsic ID customers to simplify their testing and certification procedures for any device that needs Federal Information Processing Standard (FIPS) validation, such as passing the FIPS 140-3 (or its predecessor, FIPS 140-2). For more information on this topic, please read this article from Intrinsic ID on CAVP testing.

Intrinsic ID is the world’s leading provider of security IP for embedded systems based on PUF technology. The technology provides an additional level of hardware security utilizing the inherent uniqueness in each and every silicon chip. The IP can be delivered in hardware or software and can be applied easily to almost any chip – from tiny microcontrollers to high-performance FPGAs – and at any stage of a product’s lifecycle. It is used as a hardware root of trust to validate payment systems, secure connectivity, authenticate sensors, and protect sensitive government and military data and systems. Intrinsic ID security has been deployed and proven in hundreds of millions of devices certified by EMVCo, Visa, CC EAL6+, PSA, ioXt, and governments across the globe. 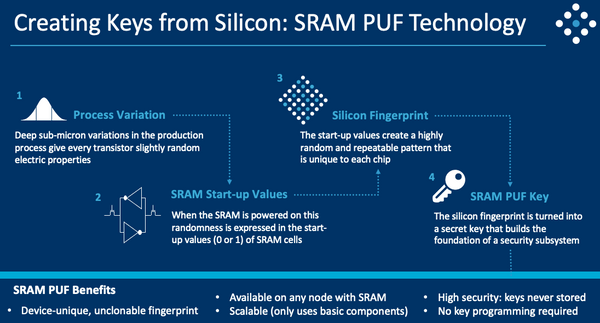